Plant a tree in memory of John
An environmentally-friendly option 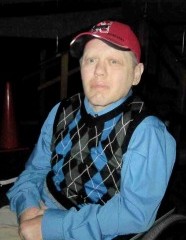 John Leonard Juilfs, 62, of Beatrice, Nebraska was born in Auburn, Nebraska to Welton and Marlyse (Viox) Juilfs on April 9, 1958.  He was the fourth of five children.  John was raised in Talmage, Nebraska where he attended school and resided until 1979.  At that time, he moved to Mosaic, formerly Martin Luther Home in Beatrice, Nebraska.  John lived at Mosaic for 42 years.  He was loved by both the staff and residents alike.  Though his physical abilities were limited, it never stopped him from trying to do his best.  He worked in the workshop and enjoyed many activities at Mosaic.  John attended classes at Southeast Community College and was a regular at many eating establishments in both Beatrice and Lincoln.  He will be greatly missed by his family at Mosaic.

John was a very important part of our family.  He loved to talk about everything from sports, to current events, to the local news.  John had an excellent memory and could tell you details of things that happened many years ago.  He also loved Nebraska football.  John attended many games over the years and could tell you the score of games played over 50 years ago.  He also loved trains and even had his own train set that he enjoyed operating. Fly high JLJ!

Our dear brother John went to heaven on Palm Sunday, March 28, 2021, at Bryan LGH West in Lincoln, Nebraska having reached the earthly age of sixty-two years, eleven months and nineteen days.  He was preceded in death by his parents, sister-in-law Nancy Juilfs and niece Sarah (Keat) Danner.

Memorial Services will be held at a later date with inurnment in the Fairview Cemetery north of Talmage, Nebraska.

Condolences can be shared online at www.hallfuneral.net

Plant a tree in memory of John by clicking here.
To send flowers to John's family, please visit our floral store.

A service summary is not available

Plant a tree in memory of John
An environmentally-friendly option

Plant a tree in memory of John

1 tree planted in memory of John

A Memorial Tree was planted for John Leonard Juilfs

Plant a tree in memory of John