Hall Funeral Chapel has gone through many name changes since its 19th century beginning as the Casey and Armstrong Funeral Homes. As the funeral home has evolved, it has carried on the tradition of offering the finest funeral service to the families of southeast Nebraska.

The Casey Funeral Home was started by Daniel Casey and the tradition was continued by his son Roy and his grandsons, Allan and Lee. The Casey family operated the funeral home until 1971 when Allan and Lee Casey joined with Glenn Witzenburg to merge the two local funeral homes into a partnership which became known as the Casey-Witzenburg Funeral Home. This partnership lasted for the next 20 years until 1986 when Mr. Witzenburg purchased full ownership of the firm.

In 1988, Mr. Witzenburg joined into regional partnership with Service Corporation International and continued with corporate management until Ben and Amanda Hall's purchase of the Funeral Home in 2001. Ben and Amanda operated the funeral home under the name of Casey-Witzenburg-Hall Funeral Home until the fall of 2003 when a decision was made to change the firm's name to Hall Funeral Chapel. Through these transactions, they returned the Funeral Home to local ownership and renewed its rich and proud heritage.

On the third anniversary of the 2001 purchase, Ben and Amanda expanded Hall Funeral Chapel by establishing a location in Falls City, Nebraska. The new Falls City Funeral Home joined the other Hall Funeral Chapels in Johnson and Auburn in offering dignified, quality and caring funeral service to all of southeast Nebraska.

In March of 2016, Todd S. Dierberger and Zachary J. Coffin purchased the Hall Funeral Chapels and Southeast Nebraska Crematory from Vaughn and Tina Wright and will continue to provide the same professional service that has been provided since the 19th century. 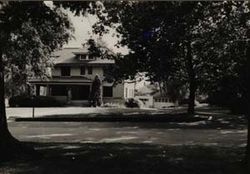